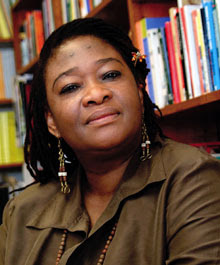 Dr. Ifi Amadiume (born 23 April 1947) is a Nigerian poet, anthropologist and essayist. She joined the Religion Department of Dartmouth College, New Hampshire, U.S. in 1993. She is currently the Professor and Chair of African and African-American Studies at Dartmouth.

Born in Kaduna to Igbo parents, Amadiume was educated in Nigeria before moving to Britain in 1971. She studied at the School of Oriental and African Studies, University of London, gaining a BA (1978) and PhD (1983) in social anthropology. Her fieldwork in Africa resulted in two ethnographic monographs relating to the Igbo - African Matriarchal Foundations (1987), and the award-winning Male Daughters Female Husbands (Zed Press, 1987). A book of theoretical essays, Reinventing Africa, appeared in 1998.

She is on the advisory board of the Centre for Democracy and Development, a non-governmental organisation that aims to promote the values of democracy, peace and human rights in Africa, particularly in the West African sub-region.

Dr Amadiume is widely regarded for her pioneering work in feminist discourse: "[h]er work has made a tremendous contribution to new ways of thinking about sex and gender, the question of power, and women's place in history and culture".

March 18, 2009
Anyone who follows the XML or semantic web world knows of Uche Ogbuji's work. Uche Ogbuji is a Partner at Zepheira, LLC, a solutions firm specializing in the next generation of Web technologies. Mr. Ogbuji is the lead developer of 4Suite, an open source platform for XML, RDF, and knowledge-management applications, and the lead developer of the Versa RDF query language. He is a computer engineer and writer born in Nigeria, living and working in Boulder, Colorado. Uche studied Electronic Engineering at the University of Nigeria, Nsukka for three years before moving on to graduate in Computer Engineering at Milwaukee School of Engineering in February, 1994. He is the co-author of Professional XML Web Services (Programmer to programmer) and Linux Database Bible.
Post a comment
Read more

November 26, 2019
Educated at the London School of Economics as a British Foreign and Commonwealth Office scholar, Dr Aloy Chife is the highest-ranking Nigerian-American to serve in an executive-level capacity at a Fortune 100 technology company in Silicon Valley, USA (Apple). Dr Chife was responsible for the implementation of many successful systems currently operated by the Nigerian government including the Federal Road Safety Commission (National Drivers License), the Nigeria Immigration Service (e-Immigration project), the National Communications Commission (NCC) (telecomm users (Sim Card) registry) and the National Population Commission (NPopC) (National Births & Deaths Registry), etc. Much of the support for the implementation of these technology platforms have come from the International Finance Corporation (IFC) the private sector arm of the World Bank by way of investment and loan financing. Dr Chife has also exported software to countries beyond Africa (including Sri Lanka via a World
Post a comment
Read more